Home Movie Reviews They Came Together 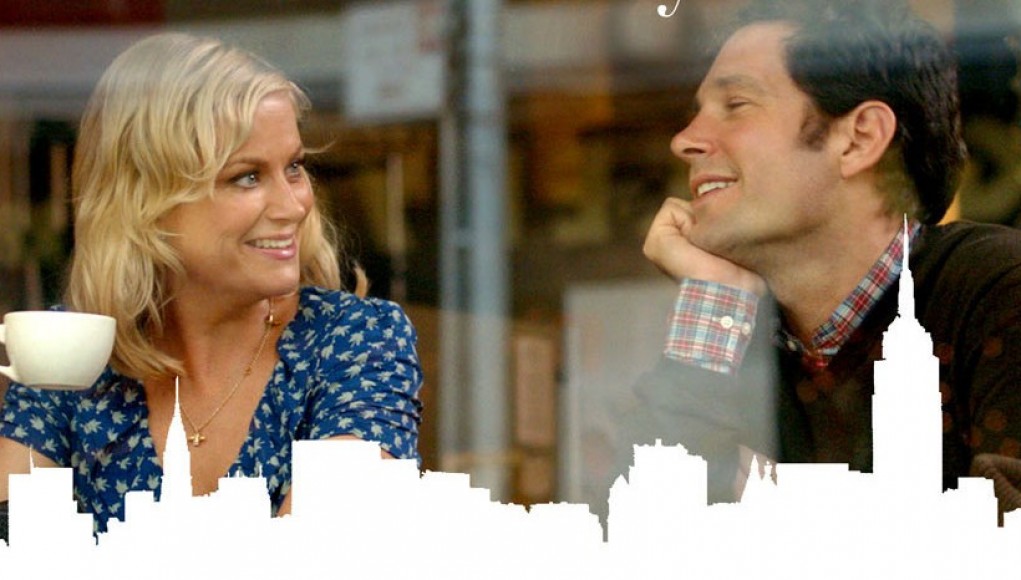 They Came Together breaks down the clichés and tropes of conventional romantic comedies, specifically from Woody Allen and films featuring Tom Hanks and Meg Ryan. Director and co-writer David Wain returns to his zany and semiotic ways with his Wain-world cast and partners, as well as many SNL alumni and contemporary talents for a refreshing pastiche on the predictable rom-com.

The film begins with and constantly returns to a double date at a restaurant with couples Joel (Paul Rudd) and Molly (Amy Poehler) who sit across from Kyle (Bill Hader) and Karen (Ellie Kemper). This double date acts as both a narration and a Greek chorus. Joel and Molly describe how their relationship came to fruition beginning with their meet-cute, where they run into each other both dressed as Benjamin Franklin. Despite their initial disdain for each other they wind up at the same costume party. As it turns out Molly runs her own independent bakery while Joel works for a massive candy conglomerate. Despite their nasty meet-cute and their professional opposition, Joel and Molly slowly become an item.

As with any David Wain film, especially co-written by Michael Showalter, the film is filled with delightfully predictable clichés that often have unpredictable and hilarious consequences. One scene early in the film has Joel’s best friend, Bob (Jason Mantzoukas), involved in an unexpected accident where he is literally left hanging from the window. Another has Joel and his friends playing basketball in a park, where each of his friends provide terrible relationship advice as they constantly miss shots.

The majority of these scenes tend to trick the audience into thinking that an upcoming moment is spoiled by predictability. Viewers who recognize these overused tropes are rewarded because these predictable set-ups are appended by zany and slightly raunchy moments that distort the conventions of romantic comedies. By doing this, the film does not talk down to its audience, but talks directly to them, just short of the actually breaching the fourth wall.

Despite the film’s predictable and cliché nature – which is the heart of the film’s comedic style – They Came Together has the rapid-fire pacing of 30 Rock but retains its poignant attempt to point out the constant shortcomings of contemporary romantic comedies. Gags are never over-the-top and is satisfying to those who cherish romantic comedies and those who become instantly nauseous. Both Poehler and Rudd epitomize the classic leads like Tracy and Hepburn, Hanks and Ryan, and Allen and Keaton.

As with any contemporary, low-budget independent film these days the film was shot on the margins, although the look and feel of it may not appear that way, nor would be large ensemble cast of veteran and fresh talent. Fans of Wet Hot American Summer or the television series Childrens Hospital will enjoy They Came Together for its attempt to usurp any semblance of classic contemporary romantic comedy, and may even ruin it for some. The filmmakers have chosen to release the film both theatrically and on VOD, which could signal a lack of confidence in the film’s potential box office grosses. Yet, like so many other films from director David Wain, They Came Together has the potential to become one of those cult classics everyone missed during its initial run.