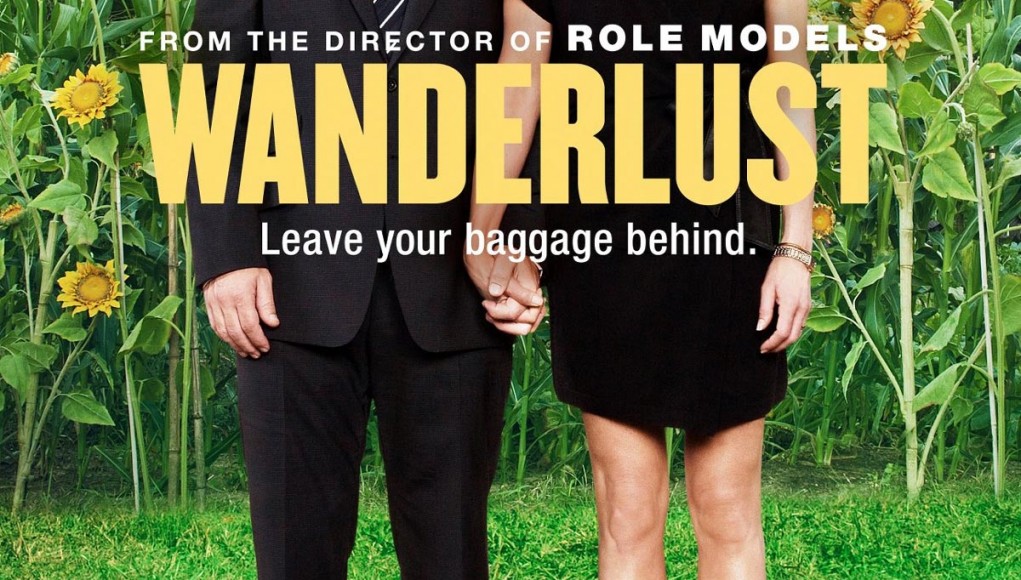 Featuring an ensemble cast of A-List stars and sub-list comedic talents, Wanderlust excels beyond its premise, even if it is familiar territory. While not exactly as satirical as Director David Wain’s previous projects, the film resonates with current economic issues without being too preachy and still lands a few clever gags.

After Linda (Jennifer Aniston) and George (Paul Rudd) sign a contract for their uber expensive micro-loft, Linda is unable to sell her March of the Penguins meets Inconvenient Truth mash-up to HBO and George looses his job. It does not help that recession hits and the real estate market goes south. George’s brother offers up his home in Atlanta, but during the road trip there, Linda and George stay the night at a “intentional community” (read: commune) and enjoy the peaceful and sharing environment. The two attempt to assimilate into the community that will ultimately their relationship.

Wanderlust is one of the few films that have humorously portrayed the Great Recession as it happened to couples and singles alike. The attractiveness of purchasing real estate for one to call their own had been heavily promoted and vertically integrated. When the curtain was pulled back to reveal fraud, scandals, and mis-managed companies that fell over night, victims turned toward minimalism after losing their jobs and realizing how wasteful they had been with money and material objects. When traumatic events happen, it alters one’s behavior, and Wanderlust explores the humor in changing that behavior in a sincere way.

The members of the commune refuse to refer to their “intentional community” as a commune to deter the negative stigma of the hippie communes that proliferated in the late-1960s and 1970s. Despite the commune seemingly able to grow and live off of their own produce, only Wayne Davidson (Joe Lo Truglio) is shown as being productive as a nudist wine maker and novelist. The sole original member of the commune, Carvin (Alan Alda), portrays a leader only by seniority. He exists to be a semi-wise mentor for the community, but his prior drug use makes him poster boy for the detrimental long-term effects of heavy psychedelic drug use, and the irrational wisdom that comes with it. The rest of the crew exhibit similar eclectic dogmas that arise with the stereotypes of hippies and free-wheelers. In all, the lot of kooks have created a close community that resonate with Linda and George.

Co-Writer and Director David Wain is responsible for classic satirical cult comedies such as Wet Hot American Summer and Childrens Hospital. Wanderlust is a rather subdued and more mature effort compared to his past projects, but that might be difficult to see when Rudd stares into a mirror practicing his double entendres. The film reunites Wain with The State and other Wet Hot alumni to create an ensemble cast that surrounds A-List stars Aniston and Rudd. Together, Aniston and Rudd have a fantastic chemistry together that makes the two charming and believable.

While there was one sub-plot involving the building of a casino that felt thrown in, Wanderlust achieves what it had set out to do. The film does not conjure belly laughs, but uncontrollable chuckles from much more subtle humor nails the social and political context. Wanderlust lacks the replay value that has made Wain’s other efforts cultural artifacts, but in the mean time, it is the most solid comedy of the year thus far.