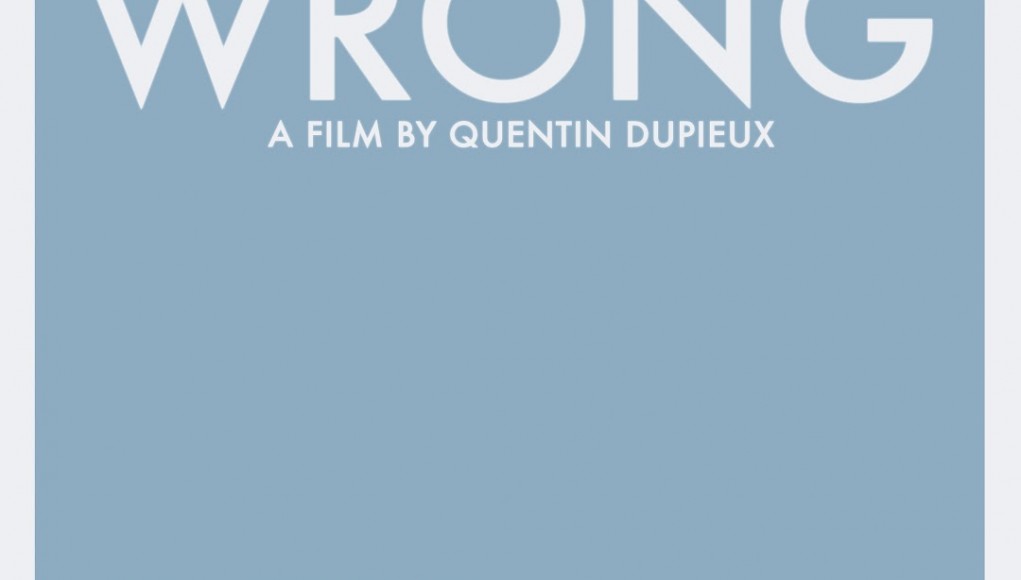 The dog is missing, the new pizza place logo sparks a charismatic phone conversation, a Zen master swears of is a psyche bond between owners and their canines, and the memories dog feces can be reproduced via video. This plethora of strange is the sophomore feature-length effort from Quintin Dupieux titled Wrong. Other than some literal puzzles and in-jokes, the film is far from wrong, it is a deliberate mind-fuck that is fun and charming.

Dolph (Jack Plotnick) awakens to find his dog, Paul, missing, which begins a series of misadventures. Distraught, Dolph calls a local pizza delivery restaurant for no other reason than to talk to someone. His conversation with Emma (Alexis Dziena) captures her heart; although they have yet to physically meet. Next, he goes to work, which is an office that is drenched due to a continuous rain from the fire sprinklers. Yet, Dolph had been fired from that position months before. To give Dolph some sort of idea where his dog is, Master Chang (William Fichtner) explains that he took Paul to help Dolph learn to appreciate his present state of being.

The opening titles of Wrong features a strange but appropriate scene: a van is engulfed in flames, the fire rescue team standing by with non-chalance, and a lone fire-fighter defecating in the middle of the road while reading a newspaper. This scene sets up the postmodern themes and motifs of surrealism and subversive cinema. Wrong is filled with comical scenes and moments where the cinema conventions are deconstructed right before our eyes and abused to bring attention to filmic traditions, all-the-while moving the plot right along at a leisurely pace.

Director Quintin Dupieux takes cues from postmodern authors and filmmakers such as Paul Auster and Charlie Kaufman, particularly in a scene where Dolph receives flowers with a note with a phone number. When Dolph calls the number, Director Qunintin Dupieux answers and pleads with Dolph to meet Master Chang. This scene is designed to provoke humor through a self-reflexive and objective aspect that comically breaks the fourth wall. More subtle jokes include his alarm clock changing from 7:59 AM to 7:60 AM.

When Dolph does finally meets Master Chang, he learns that it was Chang who took Paul, only to lose him once the van had caught fire with Paul escaping safely. Master Chang self-proclaims himself not as some sick, twisted dognapper, but a Zen master who preaches for humans to develop a psychic bond between themselves and their canine friend. Paul is handed a book about the very subject, and reads it in order to understand how he can have a greater role in Paul’s life.

On the surface, Wrong just seems like a hodge-podge of strange occurrences that deconstructs cinema conventions while offering a more traditional central narrative to root for. Dupieux explores this same concept in Rubber, another self-aware film that deconstructed the exploitation genre while a microcosm of on-lookers comment about the destructive path of a vengeful car tire. In Wrong we have story of love lost, provoked entirely by an “enlightened” agent in order to force the protagonist to learn to live in the now, and accept and give love and friendship at all times, and in the case of Paul, beyond mere husbandry.

Wrong is a strange film for those unaware of objective postmodern devices or hold genre conventions as sacred, although Dupieux’s cinema is not all that unique or ground-breaking either. Yet, the film refuses to allow the audience to comfortably find a moment to suspend disbelief. Any Kaufman-phile or disciple of Jean-Luc Godard will acknowledge the director’s influences.  In the meantime, Wrong embraces its queerness with charm and is a more mature effort from Dupieux, and its cinematography and scenic focus is much more playful too.